Kai, perhaps the most coveted of the Sheraton Grand at Wild Horse Pass restaurants, cultivates distinct interpretations of Native American cuisine using fresh local ingredients for elevated dining. The only AAA Five Diamond and Forbes Five Star restaurant in Arizona, dining at Kai is an experience like no other. Transformative cuisine, stellar service, and compelling stories of Native American culture all make for an immersive and unforgettable meal.

La Liste, an annual restaurant ranking from France, named Kai—one of only 113 restaurants from the United States to make the list—one of the best restaurants in the world in 2020.

The menu at Kai, which means seed in the Pima language, features items from the Native Seed/SEARCH Foundation, a program dedicated to preserving ancient lines of Native American seeds that would otherwise be extinct.

Guests can choose from entrees, or opt into The Journey, a memorable multicourse dinner complete with wine pairings curated by the restaurant’s own sommelier.

Located within Sheraton Grand at Wild Horse Pass, Kai is a restaurant defined by hospitality and comfort. With its southwestern decor, Kai boasts warm wood accents, luxurious contemporary finishes, and beautiful artwork from Arizona’s local tribes. For example, with the Maricopa tribe known for its pottery, the ceramic chargers on each table setting were designed  by a local native artist.

The dining room is comfortable with rustic accents but imbued with modern elegance. The simple but stunning ceiling made from ocotillo ribs pays homage to the desert just outside the restaurant’s floor-to-ceiling windows, making Kai one of the finest Phoenix restaurants with a view. Guests can admire mountain views from the dining room, and watch the sunset over the Sierra Estrella mountains. 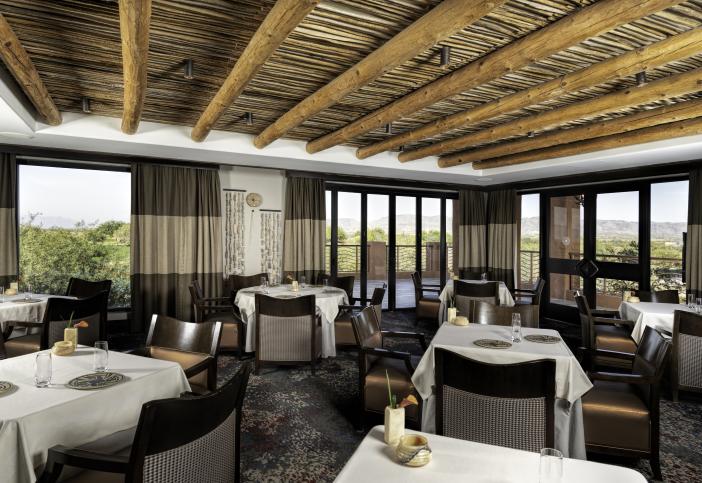